My first week in Montreal, coming up on three years ago, I had a number of goals: find a place to live, find a job

, find someone to go for a pint with. Practical goals, and all important. Since then I’ve had seven homes, friends have come and gone or remained, and right now I have two jobs. That first week, however, I had another goal that was not so much practical as emotional.

Right smack bang in the middle of the city there is a mountain – Mont Royal. (Mont Royal . . . Montreal . . . get it?). Imagine if instead of Trafalgar Square, The Louvre, or The Empire State Building, there were mountains. Mont Royal is that dominant and important to its host city. Punctuating an otherwise flat topography, it commands an influence that is greater than the sum of its parts — it’s actually just a big hill and, if it was in the Rockies, it probably wouldn’t even have a name. These things are relative, however, so I quite like the fact that it’s referred to as a mountain. The mountain. I decided before I moved here that if I didn’t scale the mountain in my first week, I had failed as an immigrant.

It was Christmas this week. My mother rang me sometime during the summer. ‘Son, I love you and I love Christmas, but the last couple of years has made me tired so your Dad and I are going away for Christmas. And we plan on being pampered instead of doing the pampering.’ Good for you, I said. And with that I knew that this year I’d be spending my first Christmas abroad.

We’re a secular family and religion played no part in my and my brothers’ upbringing, but we have always very much been a Christmas family. Family get together on Christmas Eve; the exchange of presents followed by a swim in the sea in the morning; see the cousins in the afternoon; big dinner; games and drinks until the last one goes to bed. There’s no point in trying to replicate all that when you’re so far removed

from the people and places that make it possible. 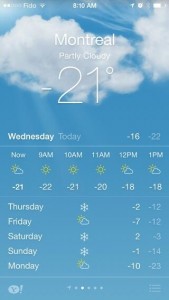 The plans I made, or that were made for me, were dashed for reasons outside of my control. So I tried to imitate just one of my traditions from home, which is to swim in the sea. Lacking a body of salty water nearby and with the St-Lawrence River nicely frozen over, I determined that the only thing I could to that would match the Christmas swim would be a Christmas run up and over the mountain. The mountain. My mountain.

It’s difficult to get across what those numbers actually mean, but if you release a drop of saliva from your lips it will most likely be frozen to your chin within three seconds. And that’s if there’s no wind.

But this is a hill/mountain on a flat plain, so there was wind. And it was -22°C.

Add to that the fact that the snow gods had deposited a thick and hefty white load on the land over the previous 24 hours, and it soon became apparent that this was going to be much more difficult than the swim. There are thousands of people who go to the swim, with much backslapping, hot whiskies and sausages once you’re done the splash and dash. Mentally and physically, this run was in a different league. I was also hungover after a splendid dinner with friends the night before.

So off I went, wearing as much as I could without sacrificing the ability to move properly. (I’m not wealthy enough to buy those outdoors clothes and items that successful people can afford. You know, the ones that would allow you to play Frisbee in the Arctic North while feeling like you’re on a beach in Aruba. The ones where the selling point of the gloves is that you can boil an egg in them using one’s own heated sweat. “That’ll be $500 please. For one glove. Two gloves are on special for $950.”)

Off I went in my affordable clothing. I was running up a mountain in thick snow in minus twenty-fucking-two degrees of thin air with Aeolus the merry god of Christmas winds deciding that now would be a great time to whip up a breeze. I was alone. I was running as much and as hard as I could. I was confused, and confusion is one of the most malignant of all the emotions. If I could banish one phrase from the human lexicon, it would be “I’m confused” because, by definition, you can’t explain it. 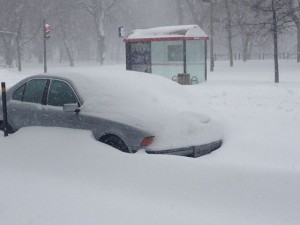 Outside my apartment last week.

Off I went to the top, where I stood and admired the city and life below me. I did that for about ten seconds before my feet got a mind of their own and my entire body instantaneously developed a homing instinct. My masochistic pseudo-tradition had to end as soon as possible.

Off I went. Home I went. But this isn’t home. It’s a home for now, but without the people, places and traditions that made me who I am, it is just a substitute. A fun, outrageous, challenging substitute, but a substitute all the same. It’s a place where I had takeaway fish and chips for Christmas dinner before meeting up with a couple of people for evening drinks. It’s different, and I’m OK with that.

Some day. Some morning. Some mountain.