Sports are wonderful. I think we can all agree on that (ok, maybe not everybody). For millennia, people from all corners of the world have been engrossed in participating in, watching and consuming the various games and competitions that have come and gone, with a weird sort of social evolution resulting in a strange phenomenon – the modern sports fan. Sycophantic and carefree, naïve and romantic, the sports fan is a marketer’s dream. Most of us know we’re a bit ridiculous, often becoming aware of the absurdity of investing so much emotional energy into something so fleeting.

Most sports fans are decent people looking for a bit of entertainment, and if that transcends into feeling part of some sort of community, all the better. There’s no harm in that. But each individual sport tends to attract a subset of fans that, although a minority, tend to be more annoying than their compatriots. Below, I’ve listed some of these groups.

There’s a reason why the only major golf tournament I can watch close to its entirety is the British Open – there is a welcome dearth of white American middle-aged males dressing like they’re about to tee off. Watching golf from the United States is cringe-worthy. Looking at the galleries, you’ll observe a sea of flatterers and sycophants, with at least one idiot prepared to shout “get in the hole!” after Every. Damn. Shot. You’ll also regularly hear them shout “great golf shot!” which helps to remind us which sport we are following. Oh sorry, I though this was a tennis match – thanks for reminding me that it’s golf.

These Bermuda shorts-wearing, baseball cap-covered folk often refer to their heroes by their first names – Tiger, Phil, Bubba, etc. – though they seem to have an inability to learn how to pronounce ‘Pádraig’, even after many years. These people are likely to be Republican voting and are often mildly racist, as can be seen when they refer to “Tiger” as being “well-spoken”.

GAA – Nationalists telling me that my tepid interest makes me less Irish than them.

Gaelic Games – football and hurling – are great sports. Fast, skillful and tactical, people from Ireland ought to be proud of them. Unlike many Irish men and women, however, I was brought up in a home where soccer reigned supreme, with a dash of rugby and whatever you’re having yourself thrown in. I’d always watch the All-Ireland finals, but beyond that I had, at most, a passing interest. I tried hard to fall in love with Gaelic Games, including one summer when I went to a couple of games in Croke Park, but it didn’t quite work out. Instead, I continued to channel my sporting patriotism through our international soccer team (a case of self-harm if ever there was one). 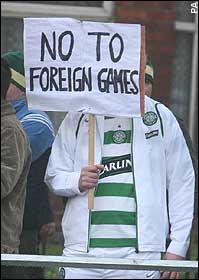 It’s fantastic to observe the visual aesthetic of thousands decked out in county colours roaming around Croke Park. Football and hurling have done more than anything to promote and maintain a sense of county identity. Alas, Gaelic Games has, and continues to have, a hyper-nationalist side that is creepy. On more than one occasion I’ve had my Irishness called into question because I don’t avidly follow our national sports. One of these obnoxious people, while telling me that he was more Irish than me, showed me his tattoo, which said ‘26+6=1’ over a tricolor. It’s a pity, because Gaelic Games are damn fine sports and the majority of fans are glad to support their local club and county.

Rugby – When they ridicule American Football because the players wear pads.

This often happens when some rugby fans (a minority) watch American Football – “look at those pansies with their pads and helmets . . . they should come and play some rugby and see what real men are made of . . .” ETCETERA Et-frickin-cetera ad infinitum.

What they don’t realise is that, in spite of the fact that there is a similarly-shaped ball and posts, these are actually different sports with different rules. I could go on and on, but the upshot is that if American Football players did not wear pads and helmets, there would be deaths each week in the NFL.

I’ve accepted that fighting is ingrained in hockey and is likely to stay, but on more than one occasion I’ve had hockey fans tell me that fighting is the best thing about the sport. I’ve had people show me videos on their phones of their favourite fights, some of which involve themselves. The best thing about hockey is not fighting, which tends to be premeditated between certain ‘enforcers’ and therefore not just a spontaneous outpouring of energy and emotion. The best things about hockey are its constant end-to-end plays, incredible skill, strength and teamwork, spectacular shots and saves, and sheer entertainment. Next to all that, the fighting is quite boring. And that makes those who promote it as the game’s defining and best quality similarly boring . . . and annoying.

Soccer – “I fucking hate scousers, me.” Get a grip. You’re from Killiney.

Usually found perched on a stool in a suburban pub, these people have become convinced that their support of Liverpool or Manchester United means they must hate “mancs” or “scousers”. They’ll even sing songs about how much they hate them, often mimicking the accents of “mancs” or “scousers” while doing so.

Baseball – Not actually interested at all in what’s going on.

I’ve been to three Major League Baseball games and each time I’ve felt completely out of place. The $12 warm-ish Coors Light I can just about deal with, and the weather is usually nice, but pretty much nobody present seems to actually care about what’s going on in the game. They’ll often turn up after the first inning and leave (leave!) before the game is finished, even though it might still be very much undecided. Then you have the high-fiving. Oh, it’s relentless. A group of people wearing shirts at least two sizes two large will turn up an hour into the game, sip on their $12 Coors Light and $8 rubber hot dog, not watch, then when they hear a big noise they’ll shout ‘Woooooo!!’ and high-five each other for about 45 seconds.

“Oh man, A-Rod smacked that one out of the ballpark real good.”

Shut it you goon. You weren’t even watching.

Running across some fans of these three sports is a concept that is lacking in their brains – delayed gratification, the idea that if you wait for something, the value of that thing will be much greater when it arrives.

Would you rather have a single McDonald’s hamburger twice a day, or one fillet steak every Sunday? Same concept. Yes, there are fewer goals, but when they come (and they average around 2.5-3 per 90 minutes, about the same mean gap between touchdowns in American Football, including time when the clock is stopped) that makes each one of greater value to the team, and therefore to the game and by extension to the fans, than, say, a basket or field goal.

Delayed gratification . . . try it some time.