We’re a cocky bunch, us humans. We think it normal to go anywhere and everywhere. We have walked on the moon. We have invented devices that allow us to talk to friends on the other side of the planet, and we do so without a second thought. We have figured out why apples fall down from trees rather than up, why we get certain diseases and how to combat them, and we’ve travelled faster than the speed of sound. All things considered, we must be the most impressive species ever to have inhabited the Earth.

And then something comes along and reminds us that we’re a just globs of atoms running around, trying to enjoy, or just make sense of, the tiny, brief flicker of life that we each possess. This week, that something was Hurricane Sandy. We did not invent this thing (actually, this Texas-based radio host believes precisely the opposite), but it put a stop to most, if not all, of the aforementioned achievements. Telephone and internet connections went down, hospitals had to close, as did airports and other transportation centers. While gravity itself remained intact, things did not quite fall down in the normal way, preferring instead a more scenic route that also involved upward and sideways before joining other debris on the ground.

It sounds strange, maybe even cruel, but my friends and I got through the storm without much hassle. We huddled in an apartment, made Old Fashioneds, and even stepped out to see what was going on. The personal consequences for me are that I lost a few hundred dollars in terms of opportunity cost due to my workplace having suffered a blackout as well as some superficial damage. For others, they lost lives, homes, and other property.

A mixture of cabin fever, curiosity, sympathy, and an eerily calm and beautiful evening just hours after the storm led a few of us into a decision – we would walk from Bushwick, Brooklyn, where we live, to Manhattan. And so we did. 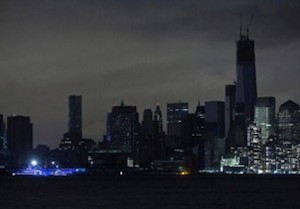 Crossing the Williamsburg Bridge, it looked like we were crossing into something more like Pyongyang than New York City. Complete darkness. Everything south of 34th street was powerless. Have a look at this photograph below, which would normally reveal the bright lights of the Freedom Tower at the World Trade Center. 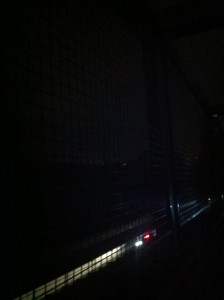 The whole of lower Manhattan – the centre of the financial world – was without a commodity that has been with us for almost two centuries: artificial light. No traffic lights (but plenty of cars almost crashing into each other), no phone network, no internet, no business, no public transportation.

We walked north about fifteen minutes from the Lower East Side to the East Village in almost complete darkness, save the odd candle flickering in the windows or the headlights of a car passing by. We found a bar, valiantly selling cans of cheap beer and liquor. Someone must have gone uptown for ice a few hours earlier. When a local with a dodgy haircut and raspy, New York voice shouted, in a way only Americans can pull off, “Everybody, let’s have it for New York! Wooooooo!” we all joined in. The lawlessness meant that a regular was smoking at the bar, and soon everyone except me was puffing away. It was the closest thing I’ve ever experienced to being in a Speakeasy, prohibition style. 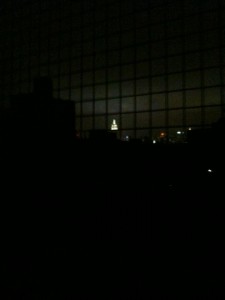 I said it to a friend earlier today, and I still feel this way, but the complete lack of routine and ad hoc nature of daily life in recent days has made me feel that I am living in the third person. It doesn’t feel like I own the time that is passing before me. Without regular work, and also with the fact I’m moving out this week, Hurricane Sandy came at a very weird time. I’m just thankful (though to whom, I don’t know) that I am healthy and lost nothing material, and that my friends can say the same. To anyone reading who cannot say likewise, you have my utmost sympathy and moral support.